Africa is far behind us.  We no longer travel the lands of the Maasai, the Zulu, the San. We’re far from the Zambezi yet the vision of the river exploding over a precipice into an immense cauldron of foamy mist then bursting into the sky hundreds of feet above the river, visible many miles in the distance wants to endure. The memories of our seven month journey across the African continent have begun their gradual fade like silver halides on celluloid film. Would our memories of Africa diminish so slowly!
Now we are traveling the lands of the Normans, an extinct European tribe that inhabited the west coast of France centuries ago then faded through miscegenation into the genetic fabric of Western Europe.  The visions of modern Normandy are shockingly tranquil.  We miss the entrancing wildness, the earthy rawness, the compelling power of Africa. Europe is a conquered land. The waters of the Seine are calm, ripple-less, sedate though stunningly picturesque.  This peaceful river is filled with barges and lined with farms and smoky factories.  There are no hyena here, though yesterday we saw some ducks. There are no crocodiles here, either,  though we drove by a close relative apparently at Alligator Bay near Mont St. Michel. We chuckled. We’re traveling in a Volkswagen Golf.  We don’t need a high clearance 4X4 mobile residence we named Kiharambee! with all-weather tires for muddy roads, skid plates to protect our engine from thumps on stone, or a snorkel to cross rivers.  Our overland titan which seemed more like a friend than car by journey’s end is strapped into a ship’s container somewhere off the coast of Angola heading for Felixstowe, England, destined for the equivalent of automotive mothballs.  We’re cruising bolangeries, rotisseries, chateauxs and cathedrals, lots of cathedrals. The World Cup 2010 is history and South Africans are now free, once again, to express themselves as they feel fit.  So they say. They claim to have held off their concerns and complaints to serve the interests of the country and support the World Cup, but now it’s their time to strike. Millions of them went to the streets to protest low wages, walking out on their patients in hospitals and children in classrooms.  I asked in a recent blog: “Can the World Cup Save South Africa?” The naivete of the question was intentional but it seems that some South Africans believed it possible and now recoil at the reality of post-World Cup South Africa.
History brought me to Normandy, compelled by events that shaped my life.  My first language is English.  I was born Catholic.  My cultural roots are linked indelibly to the emancipation of some heady English who revolted against their King, wrote a declaration of independence, and created the United States of America.  Self-reliance, independence, the belief that I can be whatever I want to be are the dictums of my life.    Who I am is intrinsically linked to these ancient tribal lands by the events that occurred here. I’ll explain if you’ll endure a brief review of the historical backdrop that led me here.
Long, long before it was called Normandy, this region was Celtic, the tribe of my father.  The Celts covered much of Europe, including northern Italy, all the way to modern Turkey. They were unruly and wild, preferring to fight naked, a single collar of twisted metal around their necks, and blue paint on their faces.  Almost four hundred years before Christ was born, the Celtics of northern Italy, now called Lombardy, destroyed Rome and plundered the city.  From the ashes of that horrible destruction grew a Rome that would last, arguably, for nearly two thousand years until the 15th century when the Islamics invaded and destroyed the last remnants of the Roman world in Constantinople. What does this have to do with me?  “Nothing” said the child in me a long time ago.  I no longer think like that.
One can hardly take a step on Normandy soil without retracing the steps of the ancients. Julius Caesar, the oft referenced Roman general from the Italian peninsula, the land of my mother, conquered this land, then called “Gaul,” and temporarily tamed it. He launched an invasion of the island off shore called Britannia, now called England.  Later, Emperor Claudius finished what Caesar started but couldn’t finish himself. We visited the encampment of Claudius just north of Normandy on a hill top in Boulogne-sur-Mer. We ate frog-legs and calamari and sipped French wine where Roman soldiers pitched their tents. Almost five hundred years after the Roman conquest, Germanic tribesmen over-ran the region and wiped the Romans out. Five hundred years later Scandanavian pirates called Vikings invaded the land. These marauding thieves, murderers, rapists, loved the land so much they stayed. The locals called them the  “Norsemen” (men from the North) and the conquered land became known as Normandy. 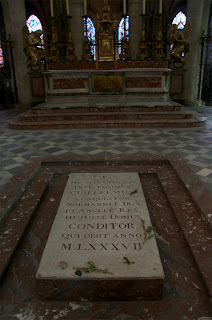 The crypt of William the Conqueror in the "Abbaye aux Hommes," or Mens Abbey of Caen.

In 1066, William of Normandy, a Viking at heart and by blood, crossed the channel waters and for the final time in the history of the island conquered it.  England became France and that invasion would bring together a collection of unruly tribesmen, Celts (the indigenous Anglos), Saxons (Germanic invaders),  and the new French (really Scandanavians) into the unlikely brethren who would father the United States, not just with people, but with ideas.  It was because of those ideas that Americans from the United States, including friends and relatives of my father, returned to the shores of Normandy on one of the most fateful days in the history of western civilization.  On the 6th of June, 1944,  Americans, in an ironic twist of historical events, invaded the land which had been so instrumental in the foundation of who I am, who we as Americans are, not to conquer it but to liberate it from Germans who had once again invaded.  That is why I returned, to say thank you to those boys. We’ve come to the cemetery of Omaha Beach. 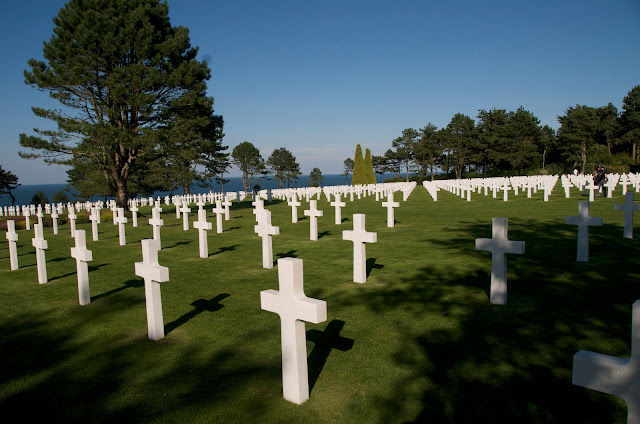 The American cemetery at Omaha Beach is located in land occupied by German troops until D-Day. In the distance is the English Channel.

Below the bluff of Normandy’s Omaha Beach wide beige sands stretch for miles to the east and west then disappear in the distance. The channel waters are populated by wind surfers, bathers, fishermen, and kite flyers. Lovers stroll the wet sands, sunbathers dot the dry sands.   Young people jog.  Some play soccer. I saw a girl in a bikini playing goalkeeper. Exploring guests freely explore the labyrinth of pathways that cut through the  grass covered dunes that rise from the beach and lead to the bluff.  It’s a warm, sunny day in August 2010.  There is peace on the bluff.  It’s quiet, serene. 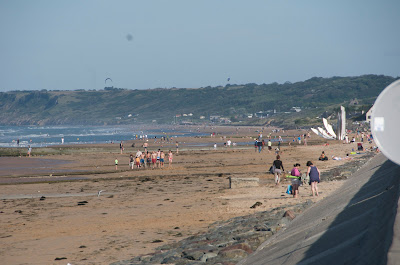 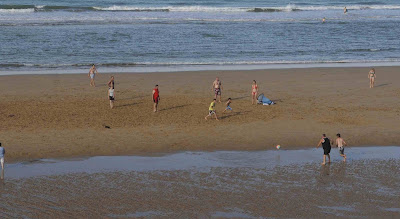 Omaha beach today, a few miles west of the cemetery.  The German troops waited on the edge of the bluff which can be seen in the distance. 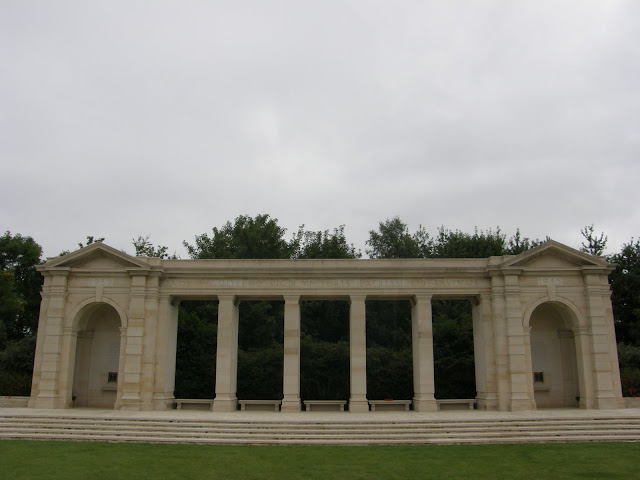 In the photo above, the inscription "Nos a Gulielmo Victi Victoris Patriam Liberavimus" is etched on the cross beam above the pillars.
at 11/22/2010 05:25:00 PM