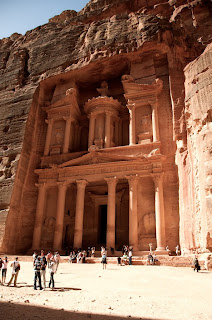 Now it’s time to speak of Petra, the compelling, magical creation of the Nabateans, lost to the world over the first millennium CE because of earthquakes and changes in trade routes.  Before an Indiana Jones movie put it on the tourist circle as a must see it was less than well known, except among archeologists and historians, who have never forgotten it.  Now, one, the average traveler,  must go to Petra if one visits Jordan.  Visiting Petra, says the BBC, is something one must do before one dies.  But then, the BBC, says a lot of things.  The Dead Sea takes a distant second to Petra on the “must-do” list in Jordan.  The Red Sea follows and I suppose Amman is on the list, but the list in Jordan is short. Is the infatuation with Petra deserved?  Comparing it with the Forum of Rome,  Karnak of Egypt, or even Palmyra of Syria, Petra does not impress for the quality of the work or the artistic contribution.  However, no one else has created a more fascinating world in such and unlikely location.  So, for that reason alone, Petra impresses just because it exists. 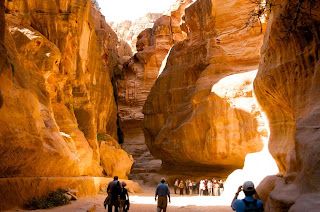 To get there, one must walk down a wadi, through a winding slit in sandstone, carved by rushing water exposing multicolored undulating sediment patterns. The sediment lines are of time past so remote, they date back to the beginning of hominids.  That would be we.  Perhaps Lucy was walking about the Ogadin in Ethiopia when this natural serpentine pathway was but a wiggly line in the mud.  As one approaches Petra, one descends and the heights of the surrounding walls loom ever higher.  There is an eery coolness and an unexpected moistness in the air.  Expectation on the faces of the visitors builds as the descent continues.  Where is the great creation, the golden collumnated facade?  How far must we walk through these water channels to reach it? What would we do if there was a flash flood? It’s not likely, but one can’t help but to think how vulnerable one is in this narrow canyon.  While we walk, people on horse drawn buggies dash buy, at such great speeds the passengers bounce many inches with each horse trot.  Some look like they may spill out of the buggy.  Children look frightened. Older people hold on with desperation.  Younger, stronger visitors smile with the thrill of the crazy ride. 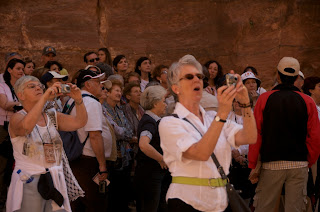 About 100 meters before arriving at the awe inspiring work of art many of us saw for the first time on film, one can see a pin hole of bright light in the distance.  The canyon wall is irregularly shaped, with outcroppings,  and the distance between them varies from narrow to more narrow.  The first image is a golden colored, brightly lit, section of one of the columns.  Some people can be heard “ooo”-ing with delight.  Everyone with a camera raises it eye-level.  Within a few steps, the shape of the view hole alters with the wall shape and the bright spectacle grows. People stop, the distance between visitors shortens, and we crowd, as if stunned, then continue forward in a creeping pace. As we move into the open space in front of the temple, leaving the crack in the earth behind us, people spread out.  There are hundreds of people, just staring, their necks locked in extension.  Most stand at a distance, lining the outside walls of the arena sized canyon, some continue to walk forward to get close, to touch, to see.  Some gather around the bedouin policeman standing watch at the temple door.  He is garnished with beads, head cloth and insignias which decorate his uniform.  He’s got a striking, thin face.  People stand next to him to be photoed.  He barely reacts.  He seems inured to if not bored with his responsibilities to watch over the structure behind him.  No one is allowed to enter, though visitors are permitted to walk up the steps of the outer portico which is pillared, six below, and six above, representing the months of the year.  There are 360 notches in the cross “beam” that is “supported” by pillars. None of the pillars is functional because there is no need to be functional.  There is no need to hold up a cross beam, because there is none, nor is there a roof, yet all of these building elements are present.  Petra is but a carving in sandstone, an artist’s rendering that mimics what he had seen in the world outside.  Whoever designed the temple of Petra wanted others to know and enjoy what he had witnessed. 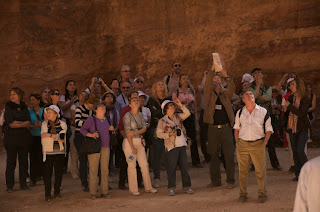 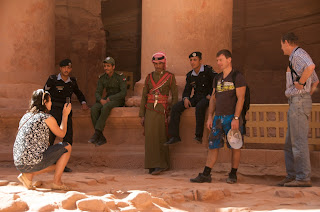 The facade of this, the first of many Petra masterpieces and the best known, was the treasury of the Nabatean King.  He kept his wealth there.  Behind the doorway,  there is a cavernous space that no one is allowed to enter.  This, we were told, was the temple. This the bedouin watches over.  The ancients first paid upon entering the the treasury, then passed into the house of god. One must pay to be in the presence of god.  Sounds like a rather crude, if not cynical expression of mercenary intent, but it’s no real surprise.  The great temple of Jerusalem was nearby and perhaps the creator of Petra’s temple had visited. Perhaps it was the sculptor’s inspiration.   Many are surprised to learn that the house of Yaweh was a grand, holy slaughter house?  To be in the presence of Yaweh one paid Yaweh’s priests a goat, a sheep, a pigeon, or just some wheat grain.  In  this way the holy men of Jerusalem got fat on the backs of those who believed.  Without the belief of the faithful, the temple priests would have either starved to death or needed to find a way to make a living.  Likewise, to pray to the gods of the Nabateans, one paid his king a fee.  It’s a  prototype of the modern church, and some, like the evangelist preachers are nicely compensated for their godly wisdom.  “Praise be the Lord!” 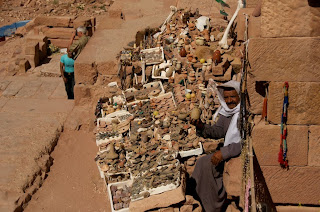 The gods of the Nabateans were chased off long ago by the gods of conquerors, those of Alexander the Great, and later, those of Caesar Augustus. The Christian god followed and then came Allah, a facsimile of the Christian god.  They abandoned the town as did the people. Petra became obsolete as traders chose different routes from Saudi to Northern markets and back.  Two major earthquakes severely disabled Petra in the 4th and 8th centuries. The treasury, temples, churches and tombs were plundered.  Much was defaced.  Only the ghosts of times long past remained as memories of Petra became nebulous recollections. Its story became legend and myth.  Then magically, after Steven Spielberg sprinkled his pixie dust on the place, Petra resurrected, once again drawing money from the pockets of those who visit.  The beneficiaries changed.  The King of Jordan dips first and dips deeply. We paid a total of $50 dollars to get into the place, but come soon, that cost will go up and not insignificantly. By November, visitors will pay three times our fee, yes, $150,  the majority going towards services mandatorily paid for but not mandatorily received. The services include guides, donkey rides and toilets, as they are listed.  But for every service there is another hand held out palm upturned.  The bedouins call them tips but they are not optional. If you want the service you must pay again. Buggy rides, camel, horse and donkey rides beyond the first waypoint which is only ½ the distance to Petra’s first spectacle, donkey rides up the 800 or so steps to the monastery, the last spectacle, are additional fees with additional associated tips. There are tea stops all along the 3 or 4 km route, at least a couple restaurants, and curio shops galore.  It the Las Vegas version of an archeological site, but the artifacts are real and bedouins are not actors. 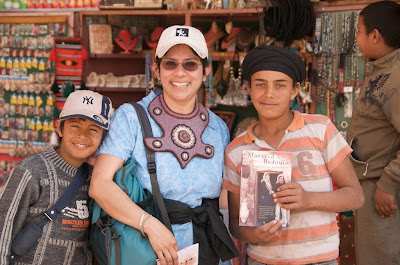 Small bedouin children walk about the roads with beads, or postcards, or something in hand asking for lira in exchange.  One three year old boy was sleeping in the sun, drool dripping on the rock where he slept, turned and yawned as we approached, and as his eyes focused on us, he held out his postcards and shouted “only one lira.”  Maria asked a fourteen year old boy, who sold books, necklaces, and other souvenirs,  if he attended school.  His hoarse voice and bronchitic cough revealed that he had been smoking for a while, maybe a few years.  He boasted proudly, with the full affect of a grown, confident bedouin man, that he didn’t need school.  He spoke many languages and he had a donkey.  He was already rich, he said. “What do I need school for?”  Another boy, not much older than 18 months and still pre-verbal, ran towards us with something in hand to sell.  His mother followed and we bought a small, silver container for eye mascara, from her.  This transaction led to a moment that seemed intimate and genuine.  We were invited to tea by the saleswoman’s friend.  We sat down on the rug with her that was laid out on the open ground, fully exposed to the sun.  Another woman joined us and children gathered around to check us out.  The woman  poured tea from a traditional bedouin pot that was blackened by the charcoal used to boil the water.   Then she opened up a can of beef spam which she cut using the edge of the can top she had just removed.  With her unwashed, dust covered hands, she spread it about on a plastic bag from which she had pulled the can.  She set down some traditional brown pita like bread next to the spam.  They she said motioned to her mouth to say  “eat.”  We accepted a small piece of the bread.  Washed it down with the hot tea, but declined the spam which we indicated should go to the children.  We offered her money and she accepted. 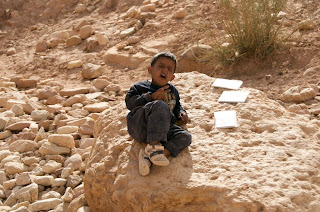 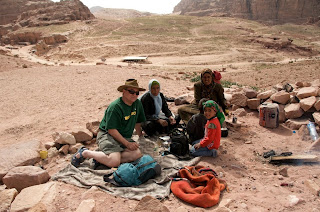 Petra may be the official property of the Kingdom of Jordan, but it is a cash cow for bedouins who live there.  They are everywhere.  They guide donkeys, drive the buggies, sell the tea, sell the numerous trinkets, teapots, necklaces, books and postcards and they guide the tourists.  It has become quite popular for the men to offer their home for a night to the female tourists who pass-by.  Thirty years ago a young white woman from New Zealand about 30 years ago accepted a similar offer.  She stayed for the rest of her life, raised some children, then wrote a book about it. Maria bought the book she wrote.  I saw the pictures, including some of the cave she lived in, which she very quaintly improved with glass windows and a wooden door.  Now, it appears that the bedouin man sees himself as the fantasy interest of every foreign woman, and from  what we could see, many of the visiting women are, at least, tempted with the idea. 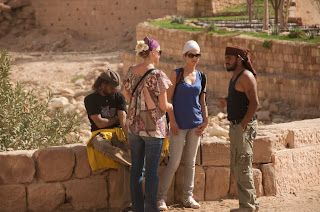 By the time we returned to the hotel area, just outside the entry point, we had walked nearly 7 hours with only a few breaks for tea and water.  The mint flavored lemon juice at the Red Cave Restaurant was the most refreshing drink I have ever experienced in all my travels.  You’re probably certain I’m using a hyperbolic description for dramatic effect.  I’m not. Thoughts about our experience lingered in a confusing swirl as I reflected on the experience. This was unlike any archeological site I had ever visited.  My first trip to Disneyland as a nine year old came to mind.  Petra is the crazy, entrepreneurial world of the bedouin. It entertains because of the personality of the people who oversee it.  It is unabashedly and unapologetically a mercenary personality.  The guardians of ancient temples should be proud.  Except for the fact that god is no longer required in order to extract money from those who visit her, Petra has achieved what I”m sure every temple would envy. 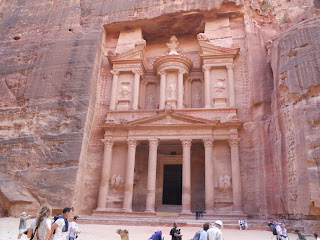