February 21: A Most Unforgettable Character

Before you meet a most unforgettable character, there is some background to tell.
This story begins just before I went to Europe for the first time at the age of 21 in 1968. I flew out of JFK after working 2 weeks as a chaperone of foreign students for the American Field Service. The AFS students had just completed one year of study in American high schools while living with American families and it was time to go home. All AFSers from the St. Louis area gathered in Alton Illinois, hopped on a bus and began a 2 week trek across the United States to Washington DC.  From there they would return home to their respective countries. There were 52 students from 28 different countries.  They named their bus, “The Yellow Submarine.”  The truth of the matter is: I went along for the ride. 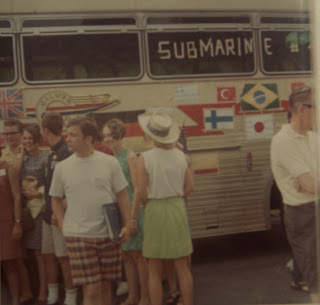 Photo of me in front of the Yellow Submarine 1968
The bus trip was inherently emotional from beginning to end. Before we left Alton, the students cried their goodbyes to their American moms and dads. There were long hugs, tearful physical separations, and sad faces on the hundreds of people who had collected near the bus.  After boarding, the foreign students talked about their parents, brothers and sisters, as if the relationship started from birth.  Their thoughts would ultimately turn towards their homes of origin but not necessarily right away.  For the moment their lives spun out of control, so they glommed onto each other for dear life, like magnetized bits of ferrous oxide, creating a surreal sibling-ship that had a certain fate.  In 14 days they would separate and within a day of that separation they would be back in that part of our planet with which they were most familiar.   Certainly, the return would be dramatic for the white South African girl, Karen, who had to return home to a world where she was forbidden to socialize with people like Israel Temesgen, a black Ethiopian, with whom she traveled on the same bus for those two weeks.
For another,  Semih Orcan,  his re-patriation was more like time travel.  He had come form a world that straddled the medieval and the modern, that was geographically divided in similar fashion, one part Europe, one part Asia. Turkey still looked like the ancient Byzantine world it had conquered 6 centuries earlier, though redressed with lots of Mosques.  Islam  pulled in one direction. Industrialization pulled in another. The struggle had been severe and extreme, so the military stepped in to  arbitrate. For a few decades before I met Semih and up until the present day, the military has hovered over the soul of Turkey like a stern big brother. Semih was to return to this world and he invited me to visit him there, which I did only a few weeks after meeting him in 1968.  Forty-two years later, I met Semih again in his Electrolux office near Taksim square in Istanbul, while on the kickabout journey to Africa for the World Cup of 2010.   Semih Orcan, whose name would sound as if he’s a half killer whale except for the fact that the Turkish “c” is pronounced like the “j” of American English, is  “A Most Unforgettable Character.”
Semih is a Turk, born and raised near Istanbul, the son of a mother who wanted him to become an engineer.  At 16 Semi wasn’t really interested in doing what others were doing nor what his mother wanted him to do.  Semih was interested in politics, leftist politics, specifically Marxist politics.  He wanted to save the world. He also knew he was an atheist.  Many Marxists are, but given that 99% of Turkey is Muslim, he was not your usual Turk, especially at such a young age. The 17th year of his life as an AFS student, was a short, and early diversion from his chosen pathway.  One might ask, “why would a  Marxist live with his enemy?” He didn’t answer that question, but I can guess. There’s an ancient Chinese adage that one should “keep friends close and keep enemies even closer.”  The day after he returned home from the US he demonstrated with students against the social injustice of the Turkish regime.  Shortly after that he was arrested for inciting the people of his community, Belerbeyi, to resist the building of the first bridge across the Bosphorous straits. The building of that bridge would eventually displace thousands of voiceless people, making them homeless.  It would also connect Europe to what is sometimes called Asia Minor by Europeans.  It is now called Anatolia. Nothing would stand in the way of the Turkish regime’s  determination to modernize and the key was a link between the two continents.   Semih’s arrest lasted only 24 hours, but Semih wasn’t finished. He made the fateful desire, to join the Turkish People’s Liberation Army dedicated to overthrow the Turkish government and constitution. He was its youngest member. It was a communist organization inspired not by the Soviets or Maoists, but by Che Guevara.  Within a short period of returning to Turkey from the US,  Semih was roaming the central mountains of Turkey with fellow members of the Turkish Peoples Liberation Army.  They robbed a bank and even kidnapped some American military personnel. When 18 of them,including the army’s leaders, were captured,  Semih and his comrades were condemned to death by a military tribunal.  His life was saved, though, after many public protests and a review of all the sentences by the military court. His sentence was commuted to 15 years in prison, but the three leaders of the captured group were not forgiven.  They were hung. 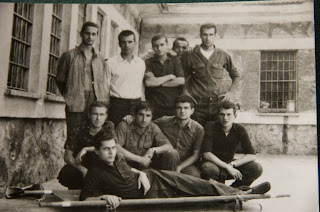 Some of the members of the Turkish People's Liberation Army. Semih is last on right, squatting in the bottom row.  Three of Semih's friends, the leaders of the army,  were hung.They are Hüseyin İnan (Top Row,2nd from left), Deniz Gezmiş(Top Row, last on right)  and Yusuf Aslan (bottom row, squatting, 2nd from left). The last words of Deniz Gezmis were: “Long live a wholly independent Turkey. Long live the noble ideology of Marxism-Leninism. Long live the struggle for independence by the Turkish and Kurdish people. Down with imperialism. Long live workers and villagers.” 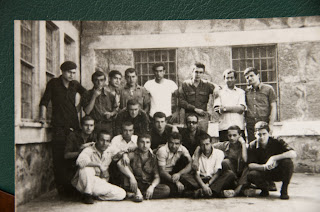 The complete group of the Turkish People's Liberation Army that was captured in 1971 and sentenced to hang.  The sentences of all but three were commuted.  Semih Orcan is 3rd from the left in the middle row.
After four years in prison,  Semih was released.  He immediately resumed his role as a political activist, hell-bent on bringing down the Turkish regime.  He became the editor of a communist magazine that propounded ideas that threatened the foundations of the Turkish regime.  A few years passed. Semih married and fathered a child. A military coup led to an even more fascist government and Semih once again found himself in jail for the public display of his political views.  The time served was harder.  The regime was more cruel.  They were beatings and deprivation.  His mother and father would die during this period and that news was withheld.  Semih only needed to “repent,” to say he would “toe-the-line.”  He only had to sell his soul to the regime, but he held fast.  Once again, the political winds changed.  He was released in 1986 to a world he had heard nothing of for years.  He discovered his mother and father were dead.  His daughter was 5 years old and he had to figure out a way to provide. 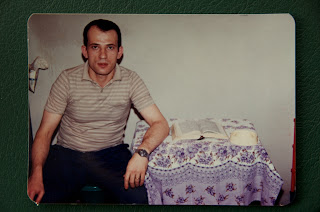 Semih Orcan during his second imprisonment.  The photo was taken during a hunger strike.
When I first met Semih Orcan in 1968,  I had no idea I was meeting the future Che Guevarra of Turkey.  Semih's behavior spoke for him. He was a fun-loving, playboy who had little ambition beyond soccer and girls.  Once on the bus, he immediately fell madly in love with an Australian girl even though he had just tearfully separated from his American girl-friend in St. Louis. He even “married” the Aussie in a mock ceremony performed for the benefit of his fellow ASFers.  Like the magnetized flecks of ferrous oxide I mentioned earlier, these two stuck together.  Semih always seemed to find himself in the middle of whatever social activity was happening, and those activities had nothing to do with politics.  He was passionate about soccer and was a member of the Yellow Submarine soccer team, the first soccer team I ever played on.  Yes, he was there at the beginning of my soccer career, 42 years ago.  In fact, it was his enthusiasm for the game, in part, that inspired my interest in the sport.  Of course, the bus was loaded with soccer fanatics from everywhere.  There was Adolfo from Argentina, Eduardo from Uruguay, Pietro from Italy, Yasu from Japan, Jan from Belgium, Hans from Austria, and more.  Nothing else seemed to excite this collection of foreign students from 28 different countries more than the discussion of football, except the near universal interest in the opposite sex.  There was always some time for politics, but no pre-occupation, though at the time there was plenty of reason to be interested. 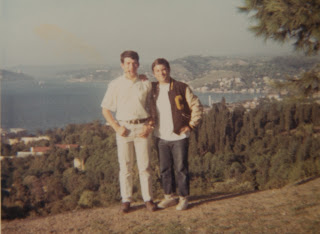 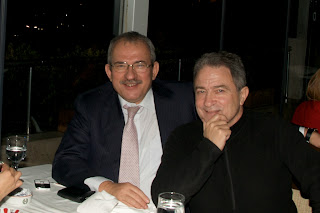 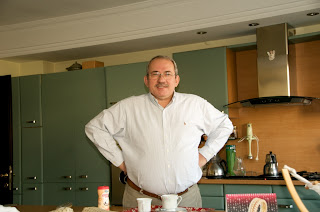 Semih Orcan in his home not far from Belerbeyi, Istanbul. February 5, 2010.
And so, I present, a most unforgettable character, even though my unforgettable character was more than willing to forget me.  Indeed, it had become his idealogical duty to do so.  I suppose his near indifference to my proposal to meet again after so many years was just a contextual continuation of the little “box” he had put me into.  Yes, I was still there among his photos, arm in arm, naive, if not simply ignorant of the world that so troubled my friend that he could not share his thoughts with me.  Perhaps he figured it was just a waste of time to tell me who he was in 1968.  Perhaps he preferred me to believe  he was the happy, carefree soul of the Yellow Submarine. Perhaps he enjoyed the dual nature of his roles as Marxist revolutionary and capitalist playboy.   And now there is more inscrutability.   He avoided telling me what it is like to have lived the tortured life of one so deeply dedicated to a cause?  Semih nearly lost his life as he lost many of the comrades.  He sacrificed his relationship with his wife, his daughter, his father,his mother.  He may have contributed to the despair and desperation of a biological mother and father who must have been sick with worry over his imprisonment.  He voluntarily left them to live in a world that hated everything their son stood for. He turned his back on me I found out.  He turned his back on those who accepted him into their home and called him "son" and "brother."


Why did Semih Orcan invite me to visit him in 1968 to his strange, conflicted world, where, divided like his country, East from West, he embraced two diametrically opposed groups of people into his life, keeping one a secret from the other? How does a devote Marxist socialist, parade about the world disguised as a successful, capitalist boss, chauffered about as are the privileged elite who benefit disproportionately from the capitalistic practices he so passionately attempted to stomp out?  These are paradoxes too big for me to resolve. They are like the riddle of the Sphinx, too dangerous to answer, and I am certainly not, like Oedipus, either bold enough or smart enough to answer them. So, I shall travel on, as a wise traveler should do when faced with such difficult questions, and save myself so that I shall live another day, and hopefully tell, yet again, another story.
at 2/21/2010 06:48:00 PM