A Short, Sweet, and Hectic Trip to Osnabruck 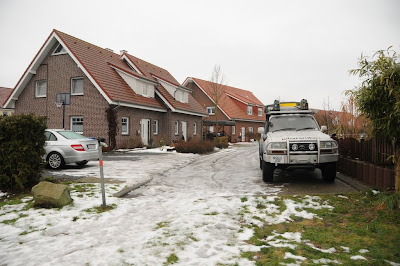 Since the last missive, we’ve covered many miles indeed.  My last report was titled “Kiharambee!” with the exclamation point and the flourishing, crescendoing “bay” sound at the end.  Never forget the guttural “Juu,” meaning “up.”  Your spirit, like the meaning of the response, will be uplifted and everyone who joins you in the resonant retort will feel the power and purpose of future visions of Africa. Since that report,  Kiharambee has traveled from Peterborough, UK, to London, then Dover, shipped across the English Channel to Calais, stopped over in Gent, Belgium, then winded it’s way some 500 km to Osnabruck Germany.  Brrrrrrrrrr!  I thought we were going to enjoy a kickaround when we got here.  Alas, snow rules!  The grounds are frozen so we watched as the boys from San Francisco, Rawley Masaniai and Lewis Sweeny, under the tutelage of Joe Enochs, an ex-Seal from the early 90s went spinning.  That’s not like “let’s take a spin,” as in when a guy invites a girl for a ride in his new, metallic red convertible Thunderbird or Mustang down mainstreet to impress friends and, of course, the girl. This spinning is all about your legs, spinning on stationary bikes, at amazing speeds, under various resistance and the barking influence of a madman whose purpose is to escort you as close to your maker as you can possibly reach and survive the moment to live another day. 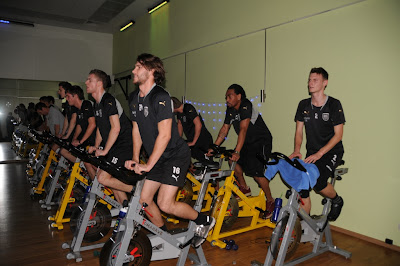 Joe Enochs, for the soccer buffs out there, is a member of the elite class of Seals players who sought his fortune outside American soccer and achieved his purpose.  He became one of the most beloved players in the 100 year history of his German club, Osabruck, represented the US National team, and is now the head coach of that club’s reserve side.  He’s given a number of Seals players opportunity over the years, and many have resided in his home while they tried to make a place in German professional football.  Kellan Wilson, a Seals goalkeeper out of St. Mary’s College, made a good name for himself while here, though prematurely cut his career short.  Nick Murphy, a local San Francisco player, spent a whole year here playing with the U19 squad.  Now he’s back in the US as a central defender for San Jose State.  Anton Peterlin was here, too, for a brief period, but wasn’t noticed.  Two years later, Everton noticed him and signed him to an EPL contract. Whoa!!!  Wait a minute!  Osnabruck didn’t notice him but Everton, a megalith compared to the tiny German team, didn’t spot great talent? Don’t be surprised. It happens all the time.  What is one coach’s rotten fish may be another’s streamlined, voracious shark.  It’s life in pro football.  Now Rawley Masaniai and Lewis Sweeney are here.  Rawley’s got a contract.  He’s got all the “tools,” as they are called, but German football ain’t what you see back home.  Here you’re the technician.  In the States, players like to see themselves as artisans, full of cleverness and creativity.  The German coach doesn’t have much time for such ego-centric nonsense.  It’s all about doing your job, and doing it well.    Lewis is here to get a looksee.  However, the weather has been treacherous and Lewis’ time is short.  He may have to come back another day as the signing window closes soon. 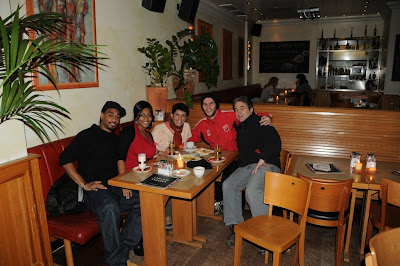 There is much more to tell on this day.  It's the birthday of Linda, Mardi-Linda Subira Cheberen Towett Simpson. It's her 34th birthday.  She is the fourth born of four wonderful children.  So happy birthday Linda.  We're in Paris and to get here we've just driven some crazy number of hours since leaving the UK.  There is a bit of a photo journal at the Picasa site:

Also, check out Facebook page, just look for "Kik Abaot."  I have to tell you all about our escape from the French police outside of Calais and the re-unification with a long, "lost," friend (lost to me anyway), in Paris.  Finally, I still haven't given a quality introduction to the other members of the Kickabout Squad, who are now in Milano Italy enjoying life there with one of Lorrie Fair's legion of football connections.  But all of this will come.  The problems are:  1) Time (there just isn't much) and 2) Internet Connections (and that's another story).  So until I can reach out again, it's "Ciao" for now.  We have to skedaddle our way to Italy and get some real pizza.