I'm writing from Peterborough.  I promised in my last letter that I'd introduce the Kickaboutafrica2010 team to you.  And here they are.  From the left:  Ashley Paguyo, Eli Sinkus, Lorrie Fair, me (Tom the Blogger), and Maria Perez.  More about team members and the week's activities later. 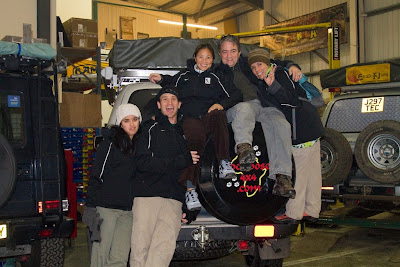 Now I'd like to introduce Kiharambee!.  That's the white vehicle below with the catcher's mask on its face and the four eyes peering through the mask's grid.  Above it is its name:  "Kiharambee!" with the exclamation point. 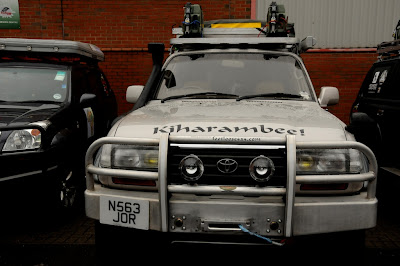 Now I have to admit I hijacked this name from someone else.  His name is Jomo Kenyatta.  He's dead now, but he lived for a very long time and as his name literally means, he was "the Light of Kenya."  His motto:  "Harambee."  It's a Swahili word and it means something like this:  Let's work together to build a future for Kenya. Times have changed, and Jomo isn't around anymore. He passed on peacefully after some odd nine decades or so.  There's a ton written about him and he was far from a perfect man.  However, he could speak.  There was nothing like a Jomo Kenyatta speach.  He had a rich, deep, resonating and powerful bullhorn of a voice. Kenyans listened in raptured attention.  A bit like the Brits did when Churchill spoke on the radio in the 40s or we Yanks when Kennedy spoke in the 60s, or at least as we thought we did when film clips nostalgically bring us back to our days of the American Camelot. (Yes, Shona, I know that wasn't a real sentence, but I kind of liked the way it flowed).  From 1964 to 1978, Jomo Kenyatta lit up the Kenyan world with his oratory and that magnificent voice.  He loved his Swahili.  And at the end he'd wave his white hair  fly whisk around his head and shout out "HARAMBEE." But to write it doesn't do the word justice.  Kenyatta would draw it out and finish it with a bellowing "BEE" pronounced like the English word "bay."   And everyone there, sometimes in the tens of thousands, because Jomo loved a public audience, would all, in unison say "juu," meaning "up" or "forward," as it Kenya will rise and be powerful.  But when thousands of people say a word like this it doesn't even sound like itself.  It sounds more like the earth is trembling and the ground might break.  It's more like a deep, guttural groan, but not with a hint of the negativity of a groan.  This was a groan of excitement and exhillaration.  And they would be frenzied, animated, and excited about the future of Kenya.  Then he would repeat it, "HARAMBEE."  And this time he'd prolong the "bay" sound, raising it's pitch from base to tenor.  Again everyone would make the earth tremble and you could feel the power of Kenya's hopes and dreams for the future of an independent, self-governed world of Africans, unshackled by colonial restraints, and the sound would reverberate about the country in every hut, school, office, or open field where there was a radio.

So, in honor of a powerful African with a powerful message, I bring you "Kiharambee!"   You are asking, what's the "ki" all about.  That's a good question.  It's a sign of humility and respect for one thing.  One shouldn't shouldn't quote a great man and  plagiarize his idea willy nilly. Also, one can't possibly put the relevance or import of our whimsical journey through Africa, done in the spirit of "harambee,"  on the scale of true human greatness.  So, I used the diminutive, "ki," to but the word appropriately its place.  This is the "little" or "tiny" project to work together to make the Africa of the future, in the spirit of Harambee, like many of us old Peace Corps hands who used to  work in Harambee Secondary Schools to participate in country building.

So now you know. That's how this hunk of metal, rubber, tubes, cables, glass got its name. It was nicely assembled by Footloose4X4, a wonderful outfit of men and women working in the small town of Peterborough, or "Pedro Hermano," as my youthful brethren have renamed the place since Peterborough, around here sounds more like "Peter Bro."  Shout "Kiharambee!"  Don't forget the exclamation.  And when you say it, see if you can get a room full of people to groan, in base or low baritone, from the deepest part of their guttural anatomy, something that makes the ground beneath your feet tremble a bit.

Okay, now look.  It's 8 AM.  We have to go pick up Kijharambee and Pumba (that's the other collection of nuts, bolts, wire, and glass) and drive to London because we have a date with Chelsea and Sunderland.  I want to tell you more about this rather unique, eclectic, if not eccentric, group of ours.  However, there's no time.  Also, there's no time for editing.  So in the interest of time, the absence in this case, I'm posting.  This week has left few minutes to do anything except prepare so I ask you to bear with me as I scribble my unpolished words and ideas just to let you know, I'm thinking of home.

Tomorrow is a busy day.  We're off to Belgium.  The Pumbaa team (Lorrie, Ashly and Eli) are going to Bruge.  Maria and I are off to see Koen De Smet, a great surgeon, because I have a few questions to ask about the femoral bone in my right hip that he resurfaced six years ago.  It's all good.  I leave you with a question we're facing.  Do we chunnel are way to Calais or shall we brave the anger of a wintry English Channel and ferry our way across?