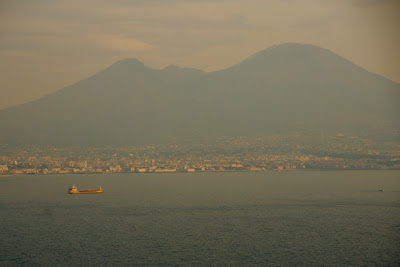 Vesuvius greets me this gray morning.  Vesuvius is calm now.  After all it’s almost 2000 years since it spewed its angry torment over this whole region and froze, for the benefit of the generations who followed, like a single clip in a movie reel, the lives of thousands of people who lived at the base of this one time active volcano.  Life, as it was lived in Roman times, was preserved for us to witness.  Some perverse Roman god, who had hobbies like constructing tiny ships in tiny bottles, sacrificed the humanity of cities like Pompei and Herculaneum, to entertain those who followed with remnants of their art, architecture, engineering, language, and other titillating tidbits. Or, maybe in a moment of perversity, He or She (no god ever took responsibility) preserved these artifacts to boast how easy it is to destroy a world that required so much to create.

I am filled with thoughts of history this morning, inspired by the blue and busy Bay of Napoli and the sleeping giant of Vesuvius in the distance. Only a few days ago, we were at the would-be extreme edge of what was once the Roman Empire, in Osnabruck.  I was hanging out with footballers and briefly reported the experience.   They are young men who have dreams completely unlinked and disparate from the ambitious men who penetrated the wild lands of Germania to conquer the barbarians North of the Rhine. Sometimes I wonder if anyone else thinks these seemingly random and tangential thoughts that bare no apparent relevance to the present!  Yet I do and I have the temerity to talk of it.

In those times, no one from the “civilized world” could understand the inhabitants of the Teutonic world, Germania. The Romans only heard “barbar” this and “barbar” that.  So they called them “barbaria” or barbarians. They were the Avatars of a distant land, painted, wild, incomprehensible, ignorant, and big, really big to the tiny Romans who averaged something near 5 feet in height, or maybe less.   And it was right there, a few miles outside of Osnabruck, where a prince of Germania, Arminius, a hero revered today,  who had been trained in the ways of the Romans, led three Roman legions and thousands of supporting staff into a trap that ended their lives.  Perhaps 30,0000, maybe 50,000 people, died and the event marked the end of the expansion of the Roman Empire beyond the Rhine River.  The exploitation of a land and a people ended so said the triumphant Teutonic people.  The Romans had different things to say.  Their defeat, one of their few,  was a bitter end to their Northern expansion.  They were humiliated and crushed by wild, undisciplined, painted savages, who had no culture and nothing of redeeming value save the natural resources their land offered the would be conquerors.  Yes, we did just see this story on the big screen, didn’t we, in 3D.   In the much earlier, never screened, and seldom discussed version of the same story, Roman body parts were paraded about the countryside in celebration of the Germanic victory, Roman gold was melted and reshaped to please Teutonic brides, and Roman military equipment and weaponry became the property of a people who still had one foot straddled in the stone age.  Meanwhile,  in Rome, Caesar Augustus, the heir of Julius, considered by many to be the greatest of all the emperors,  banged his head against the marble walls of his palatial home in the Forum, screaming at the spirit of his dead general, Varus, who brought ignominy and perpetual shame to the greatest military power ever known to humankind. In case you’re wondering who wrote this movie script, his name was Tacitus.

As we cover these lands, so rapidly in Kiharambee! it would make Caesar jealous beyond belief, I keep thinking of everything that happened here. We crossed the Rhine in about 30 seconds and barely noticed the experience. Julius Caesar crossed the Rhine, too, actually twice, just to show the Germans he could do it when and wherever he wanted.  To prove his point, he built a bridge in 10 days, crossed the Rhine with his legions, paraded about German tribal lands, crossed back to the Belgium side then burnt the bridge behind him.   Something about my crossing the Rhine at 100 km per hour seems to toss, like hand crushed paper, the accomplishments of one of history’s greatest generals into the waste basket of trivial and irrelevant facts; however, in his time, Caesar's accomplishment was something akin to installing the first trans-atlantic cable.

Why did I ever bother to learn this stuff!!  Here’s another: Two days after speeding across the Rhine,  we drove by Alesia, still plowing along at 100 km, sometimes a little faster.  I know, most of you are scratching your head.  What, who, where, why does anyone care about Alesia? It sounds like the name of a girlfriend who got away or maybe some canine breed.  Alesia is the site of one of the most seminal historical battles in European history. This is where the Roman Army, under Julius Caesar, who chronicled his accomplishments in the Gallic Wars, managed to defeat an army of French people.  In those days the Romans referred to them as the “Gauls,” and the army Caesar defeated was some 10 times the size of his own. He employed a unique, if not bizarre, tactic, that is still studied in military academies.  The technique even has a name which I will spare you.  Those of you who have cravings for facts that have minimal relevance to real life will surely look it up.  Caesar first surrounded the core of his enemy who had fortified within the walls of fortress.  That was conventional enough, but then he built a second fortress around his own army.  So neither could he get into the fortress of his trapped enemy nor could he get out of the fortress he built to protect himself from a gathering enemy. Soon the whole of Gaul, yes every available warrior in France, Belgium, and probably parts of Switzerland, surrounded him. Hundreds of thousands had come to rescue the greatest Gaulic leader of the time, Vircengetorix, who was surrounded by Caesar’s army as Caesar’s army was surrounded.  Rome was facing certain defeat, or so it appeared. Yet, by trapping himself within the walls of a fortress, Caesar gained the time he needed to breech the walls of his enemy’s fortress. In the end, Vircengetorix surrendered, and the Gaulic warriors dispersed. The fallen leader was taken back to Rome, paraded through the streets of the city, and ritually strangled a few years later.

And that, my friends, may be the shortest versions of two of the most significant historical events in European history:  the Roman defeat in Germania and the Roman victory in Gaul.  Consequentially, today, it can be argued,  France is still Roman (at least by language and culture) and the Germanic peoples? Well not only were they never conquered by Rome (minor victories not included), they, and like minded folk, wreaked havoc and revenge on the world that dominated life South of the Rhine for nearly 1000 years.  In 408 AD, the Germanic tribes of the North crossed the Rhine, headed for   Rome, destroying just about everything in their path, thus precipitating what is commonly referred to as the “Dark Ages.” That’s super-simplified history, but nonetheless, pearls of mostly forgotten memories of a time when this land was as wild and as open as the grasslands of Africa, the ultimate destination of this adventure on Kiharambee!

The historical perspective is head scratching. Europe is filled with so many people, so much asphalt, so many trucks, so much tobacco consumption, so many strange characters walking the streets of Paris, so many Ibis hotels along the roadside, so many petrol stations and huge towers with spewing smoke, so many bridges and tunnels and power lines…..and did I mention the people?  I kinda want to ask the folk I meet:  did you know what happened here one day?  Of course, I don’t.  In part, I don’t want to embarrass myself.  In part, I know the look I’d get. What response might I hear from the concessionaire at the “On the Run” convenient store, or the barman at the White Horse pub in Stamford, or the cabby in London (he was from Nigeria),  or the traffic cop in Germany, or the toll collector at the end of every stretch of nicely paved road in France?  Would there be an answer?  I think there’d be just a look, like, “what is wrong with you dude?” or “I have no time for your nonsense,” maybe, “Are you from some other planet or something?", or perhaps, " Do you have the euros for your road toll or not?”    Anyway, why should anyone give a hoot?  France is France,  Germany is Germany and the Napoleatons will never change their recipe for Margherita pizza.  And why should they?  It’s perfect.

So, those are my thoughts, this morning, on this fantastic day in Naples, after a great cappuccino, some Mozzarella Di Bufula, a bit of Camoscio d’Oro, a little prosciutto, and, a little later, “un po di vino.”