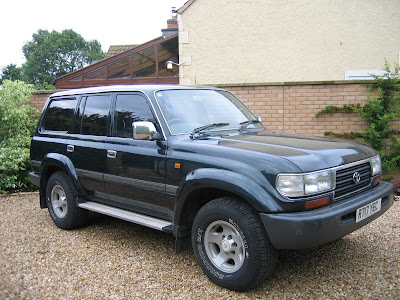 I feel like I’ve gone through childbirth.  Yes, I know, I’m a guy, I’m not supposed to be able to feel things like that, but I can’t fight the imagery.  I’ve waited anxiously for months, researching the overland blog literature, discussing my choices with the experts, and more.  What would she look like?  Of if he's a "he," will he be a gay "he" or a straight "he"? I really wouldn't care.  My liberal inclinations wouldn't permit it.  Would we give our new baby a name as do so many overland travelers who had a “Skully,” or a “Gus,” or a “Harry”?  Then suddenly, as if all the discussions and worry came together, a sort of embryonization,  Paul Marsh of Footloose 4X4 called me and said, “I have it. It’s a Toyota!!”  Not a girl, not a boy.  It’s a Land Cruiser. Model 80.  The Land Cruiser, our new baby, has a great history in Africa having survived the test of time.  There I go, humanizing a collection of nut, bolts, steel and wire, like I believe in Transformers or something!

Seriously, this is a good birth, and I'll stop the anthropomorphicizing (don't look it up, I created it, but it means pretending a heap of metal is a kid) for a bit. Here's what's important: Parts for this vehicle are available all along the route from Cairo to Capetown.  We’ve purposely selected a slightly vintage 1996 model because it has fewer electronic parts (i.e electronic repairs are computer dependent) than newer versions of Toyota's overland capable vehicles.  The experts say the Land Cruiser has fewer breakdowns than the very popular Landrover.  In short, it is the most rugged, reliable, fixable, and comfortable vehicle to meet the challenges of the African road.

Details make all the difference.  Six years of driving in Africa gave me ample opportunity to learn that unexpected and catastrophic potential lies before the traveler each day when he or she gets behind the wheel.  Years ago, we were six hundred miles from our Mt. Elgon home when a few miles outside Malindi,  a picturesque Arab village on the Kenyan coast, when a valve snapped and ripped at hole through a piston head in milli-seconds. Black smoke spewed in the rear view mirror of the VW van and my heart sunk through my chest and bounced like a dead cat on the floor mat. We were severely low on cash, facing a major engine repair, and I had three days to get back to my teaching post.  Fortunately, my wife (now deceased) had secretly squirreled away 35 shillings (five bucks!! Eureka!  I love you Agnes Chengek).  A friend towed us back to Silversands beach in Malindi where we had already camped for two weeks. For three dollars I acquired a salvaged VW engine head off a backyard parts pile at a local garage.  I disassembled and reassembled the engine on the sands of the campground.  Five days later we were back home, where I had to answer for the two days of work I missed.

Here’s another mishap that comes to mind: One thousand miles to the Northwest of Malindi is Murchinson Falls, a crack in the earth  through which the whole of the Nile rushes then crashes in a foamy explosion on the waterbed at the base of the falls.  It’s a spellbinding natural phenomenon whose roaring cry seems to be either in unison with or in response to the tumult and chaos in one of the most lawless regions of the planet. This is the land of the Lord’s Resistance Army, the pariahs of Northern Uganda who terrorize, rape, mutilate the local inhabitants and kidnap their children to turn them into their “soldiers.” At the time of my last visit, Idi Amin was in his first year of doing to the people of Uganda what the Lord’s Resistance continues to perpetuate on a smaller fraction of the same population. I was decades younger then, a bit naive, and a little more fearless, a gentler way of saying “stupid.”  Idi’s boys were everywhere, just waiting for a knucklehead like me to come driving by.  After crossing the river downstream from Murchinson by manual ferry, we headed for the town of Gulu.  Suddenly, the VW did one of those spooky things it liked to do.  The steering wheel turned but the wheels didn’t bother to respond.  My wife used to remind me that there are plenty of witch doctors around to account for these unusual, seemingly inexplicable events.  I wasn’t a good listener as I preferred to defer to rationality.  In many instances, I was vindicated by the discovery of some cause.  This was one of those circumstances. We prayed for a solution to our predicament, knowing that preying soldiers could pass by at any time.  After  poking around the undersurface of the van, I found that the linch pin connecting the steering wheel shaft to the front axel had snapped.  I found a rusty nail on the roadside, a welcome discovery given the remoteness of our location.  I put the thing in the linch pin hole and, voila, the driving wheel once again performed as the engineer designed it.

The point is this: when one travels in Africa, shit happens.  So, the vehicle with which one chooses to travel is a decision of no light weight.  Now, if I may digress for a moment to complete a thought on the subject of witchcraft:   When a writer verges off topic, he may enrich the reading experience but runs the risk of disorienting the reader. The subject of witch craft was part of my everyday life while I lived in Africa.  It brought into conflict two very divergent cultures as embodied in the personages of me and my wife.  On this matter, let me assure you there is more to say; however, as interesting as that subject is,  I don’t want to veer too far off theme, our choice of vehicle for traveling the length of Africa.  May I leave you with one thought:  rational thought was not always the victor in these conflicts.  There were plenty of humbling experiences and, if time and circumstance permit, as I’m sure the months to come will provide, I’ll return to this theme and share some humility.

One may ask:  how does one prepare a vehicle, purchased unseen, prepared in England, for a trip across Africa from his home in San Francisco?  Certainly, it’s not easy and truth is I won’t know how successful my choice of vehicle is until many months have passed.  My confidant in all matters relating to the choice of vehicle and its preparation is Paul Marsh, a South African gentleman I have never met.  All I know of Mr. Marsh is what I’ve read, what people have told me, and what I can deduce from conversations with him.  In a court of law, it’s like making a case from circumstantial evidence, which in this case seems quite ample.  Mr. Marsh is an engineer, who has made a similar trip as we are making three times.  In addition, he has turned his expertise, experience and training into a business called “Footloose4X4.”  The reader can refer to his website, http://www.footloose4x4.com/, and forage a bit for more information should it be of interest.  Mr. Marsh provides me eyes, ears, touch,  experience, and access to vehicles.  If I’ve chosen well, the results will prove the choice.

The vehicle is a 24 volt, 24 valve, 4.2 liter diesel, with automatic drive.  Of these features, the only one meaningful to me is the automatic drive, which means that if necessary Maria, who is  intimidated by her unfamiliarity with a stick shift, can drive.  One thing we’re assured: this vehicle won’t look much like it does now when we hit the road in January.  The all-terrain wheels, the roof rack with a roof tent and storage box sitting atop the vehicle, will make this look seriously safari ready.  There will be a bull-nose grate thing built across the front.  The bull-nose will be strong enough to push things out of the way that need to be pushed and the grate will stop the rocks that get hurled at you by passing vehicles on African roads covered with every manner of rock and stone.  in the front of the Land Cruiser, there should be a winch to get us out of mud and water.  There may even be a smoke stack looking thing which isn’t for smoke at all, but is intended to catch air that is a little less than the usual dusty.  On the rear will be a couple of spare tires.  There will be added gas and water tanks in areas you’d never see.  Inside there will be a fridge, an elaborate electrical system for plugging in all our electronic goodies, a water purification system, and more.  We’ll even have a small kitchen and who knows, possibly a washing machine.  However, don’t let your imagination run too wild.  It’s called a Sputnik, because it looks like a Russian satellite, and it’s completely mechanical.  I’m sure you’ll hear more about it if we decide to get the thing.

In the 1970s I traveled the width and breadth of East Africa in a 1959 VW van that literally fell apart at times when I hit bumps indelicately.  I can still see the faces of East African police laughing their asses off when they stopped me on the roadside. They monitored vehicles for improper equipment, especially lights, but also basics like bumpers, and rear view mirrors.  Well, my bumper sagged a bit and sat askew, one side nearly scraping the road.  My freely spinning rear view mirror was a replacement item from a junk yard and the indicator lights on the front never worked.  What’s more they had a penchant for falling out on rough roads because of the extensive rusted body frame.  The side doors didn’t shut very well and we used to tie them from the inside to secure them.  If the policeman asked everyone to exit the vehicle, the tenuous system became evident.  My best coping tool back then was a serious self-deprecating diatribe on my bad fate.  I cursed the fact that I ended up with such a vehicle.  That I could do this in Swahili made the situation seem especially surreal and the officers couldn’t help themselves but to roar with laughter. They just couldn’t believe an mzungu (Swahili for white man) would travel around in such a beat-up hunk of rotting metal. I fear I may have set back the image of white people in that region, well, at least the image they had among the Africans.  You know... new cars, clean clothes, shaven faces.  Anyway, in all my years of traveling around, I never got ticketed.  Maybe they didn’t know where to start with the citations.  Maybe the humor of the situation helped a bit to lighten the normal gravity with which they approached the public. Anyway, for me to resort to the safety and comfort of a overland ready Land Cruiser seems a bit strange, awkward, and uncomfortable.  I feel like a sellout, but then, the idiocy of youth tends to get replaced by things like common sense and practicality over time.  I’m sure my fellow travelers will appreciate that I’ve grown up a bit.

To give you an idea what the Land Cruiser will look like, I have a couple of photos.  This first one shows many of the common accessories that are added to overland ready vehicles. 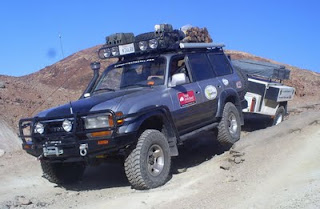 A second photo shows what a roof tent looks like though I believe ours will be a different model:

When our as-yet-unnamed member of the kickabout family has grown up a bit, I'll make sure you get to see it with all accoutrements.